When our twin girls were born, we were fortunate enough to have my mom come and live with us for the first 3 months. Since the girls were in the NICU for two weeks, we had a well-established routine when we brought them home. Now with an extra adult in the house, we were able to get into our home routine pretty easily. My mom and I did the morning routine together, then she and my hubby took the afternoon and early evening, and Chad and I took the night shift. It was hard to say bye but I was so grateful for her help. Our mother-daughter relationship grew so much stronger and we bonded like never before.

One night after my mom left, Chad and I were so tired we slept through a midnight feeding and so did the girls! Each night after we would let them sleep as long as they wanted. Each night they slept longer and longer until they eventually slept through the night. We incorporated some solid foods into their diet around this time too so I think that helped get rid of those feedings. During these months we also went to Miami to visit family and got them baptized. It was their first time traveling so we were nervous but the girls did great. 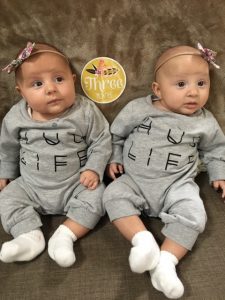 As far as sleep goes, we tried to keep them on the same schedule but it was hard to do on vacation so we did the best we could. They still seemed so little to me to be so rigid so we kept it flexible. They were meeting so many new family members, sleeping in pack n plays in a different place, and trying new foods. So I honestly didn’t want to make it harder on them by forcing a strict infant sleep schedule.

So much happened during these months! Right after the 4th of July weekend, we decided it was time for them to move into their cribs. They had been sleeping in our room in bassinets which they had outgrown. They no longer needed swaddles, and they consistently slept through the night. We felt like it was the right time for us and we were comfortable with them sleeping in a separate room. What was the baby monitor for after all?! I think it makes more sense to break it up so here’s what we did and what happened. 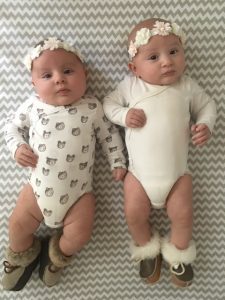 Cali and Gianna had already proven they could sleep through the night (7-7) so our challenge was to get them to fall asleep and stay asleep in their cribs in the same room. Way harder than it sounds. We also decided to eliminate Cali’s pacifier cold turkey because every time it came out she would start crying until we put it back. It was a vicious and exhausting cycle. The day right after the 4th of July we started our version of the “crying it out” method.

Our version went like this… we placed our drowsy babies in their own cribs, and they started crying almost immediately. We quickly walked out and started the timer for 5 minutes before going back in and soothing. Honestly, I don’t remember if we picked them up or not. I think it depended on their level of hysteria. Next time we waited 10 minutes, then 15, then 20, etc. If they didn’t cry for 3 minutes straight, then we would restart the timer. 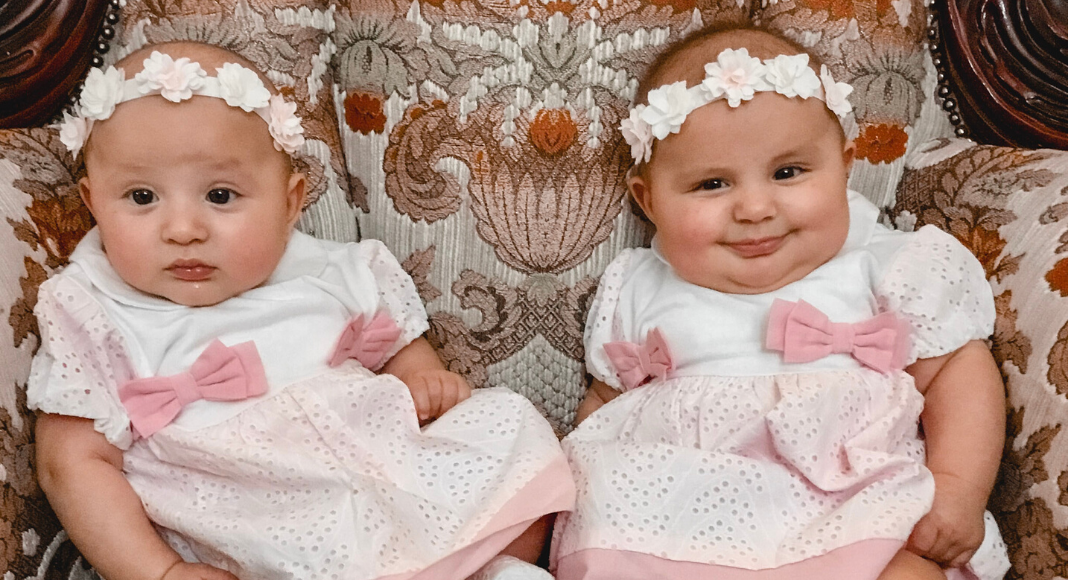 The first night this went on for the longest TWO HOURS of my life! The worst thing was that they would wake each other up during all the crying. The next day we did the same thing and they cried for an hour and a half. It probably took about two weeks for them to cry/whine for 5 minutes or less (sometimes no crying at all) and just fall asleep.

It was excruciatingly painful for us to hear them cry and it pretty much dominated our existence but in the end, it was totally worth it for us. We were able to get our room and our dinner time back, and life finally started to feel more manageable. Most importantly, everyone started to get some good, well-deserved rest. 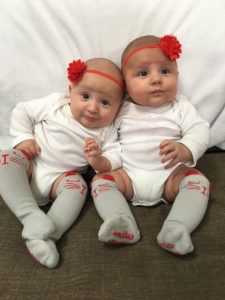 You never get that nice little break in between these milestones with twins because one of them is always going through one. They are rarely in the same stage at the same time so I was constantly dealing with it two-fold or back to back (IDK what’s worse). All of these affect infant sleep tremendously and differently so I never really knew which one was the true culprit for one of them waking up in the middle of the night.

One thing that I didn’t anticipate being such a challenge was that phase where they learn to stand up by pulling themselves up with something. This was mind-blowing, especially for Gianna. She just didn’t want to lay down and go to sleep. All she wanted to do was stand up in her crib! It was so exhausting. For a good second, I felt like all the work we had done had been a waste. I guess Cali wasn’t that mind blown because it didn’t phase her as much.

All we could do was be patient, caring, understanding, and loving and try our best to maintain a consistent bedtime routine. My advice is to choose a routine that works for your family and stick to it (as much as possible). Don’t get hung up on what you read on baby apps. This is the perfect time to do some trial and error and find what works. Be kind to yourself, be flexible, and get to know your baby or babies. 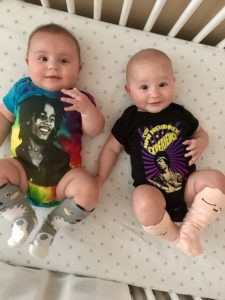 During these months they were taking 3 naps pretty consistently. We chose to have them nap in separate rooms but sleep in the same room overnight. This was mostly because (I believed) if they got good rest during the day, then they would be willing to go to sleep at night with less of a fuss. Since they were sleeping so well at night I didn’t make nap schedules super strict. What I did do though, was make sure that I fed them at the same time. That meant I woke them up to eat if I had to, and let the naps fall into place.

A strict nap schedule didn’t work for our lifestyle. We traveled again during this time and went out of the country. We also wanted them to learn to nap in a stroller, car seat, with light, with noise, and of course in pack n plays. When we were home, I took them on lots of stroller rides to the park and we made it a point not to make our schedule revolve around their infant sleep schedule. Instead, we brought them along to BBQs, family-friendly festivals, and other fun outings (we needed a social life too). Yes, there were times when this was hard but we maintained a healthy balance. Babies are resilient and they adjust so quickly. Another plus is you end up with very social babies! 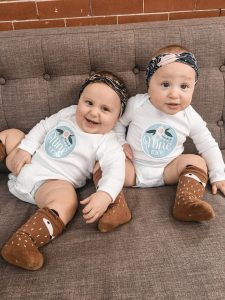 Infant Sleep With Twins Part 1: How I Survived From 0-3 Months 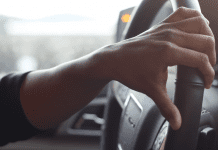 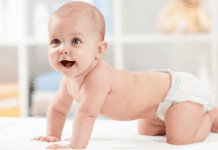 The Famous Leaps and Your Baby’s Mental Development

Lynda - November 13, 2020 0
This guide is brought to you by Pinecrest Gardens A Resource of Miami Area Holiday Events & Activities It’s the most wonderful time of the year...

2020 Guide to Hanukkah Events in Miami